Be What You Don’t See 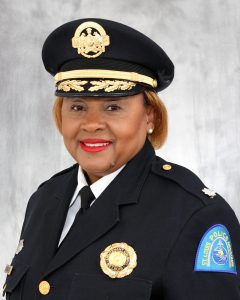 Growing up in Walnut Park (located in North St. Louis City) I saw the Police on a frequent basis. They were predominantly white and male Officers. Rarely did I see a female Officer (Black). This observation held my interest.

On May 16, 1983, I entered the St. Louis Metropolitan Police Academy. I had to quickly learn how to navigate if I wanted to be taken seriously. I also learned that having a leadership role, or a “seat at the table” (as I call it) could enable me to help everyone no matter what race, sex or sexual orientation, socio-economic status, etc.

I am the first Black female Lieutenant Colonel in the 200-year history of the St. Louis Metropolitan Police Department.

Take-a-Ways for this program include:
1. Education/training
2. Reach back
3. Build relationships outside your “circle”

Lieutenant Colonel Rochelle Denise Jones is a commissioned Officer with the St. Louis Metropolitan Police Department, joining on May 16, 1983.  Lieutenant Colonel Jones is the highest ranking female for the Department and the first African American female to be promoted to Lieutenant Colonel in the 200 year history of the SLMPD.   After being promoted to the rank of Sergeant in July of 1991, she served in the Seventh District, Internal Affairs Division, and the Canine/Mobile Reserve Unit.

Lieutenant Colonel Jones was promoted to the rank of Lieutenant in November of 2001.  As such she was the first female in the Department’s history to be named and serve as the commander of the Homicide Division.  She also served in the Fifth and Sixth Districts.

In April of 2006, Lieutenant Colonel Jones was promoted to the rank of Captain.  She served as the Special Projects Director for the Inspector of Police and Commander of District Eight.  Once again she was the first female (and first person to hold the newly created position) in the Department’s history to become the Patrol Executive Officer, which gave oversight to each of the three Area Stations and Command of the Special Operations Division (which included the Gang, Juvenile and Narcotics Units) for these Area Stations.

On January 16, 2013, Rochelle was promoted to the rank of Major and was assigned as the Night Chief and the Commander of the Support Operations Division.

On August 15, 2017, Lieutenant Colonel Jones was promoted to her current rank and served as the Deputy Chief, Bureau of Professional Standards (Inspector of Police).

Lieutenant Colonel Jones was specifically selected to participate in the NOBLE (National Organization of Black Law Enforcement Executives) “Chief Executive Mentoring Program”, which is a two year block of study and instruction at the Cedarville University (Ohio).  The specially selected candidates aspire to become a Chief of Police in the future.

Lieutenant Colonel Jones has also attended and successfully graduated from the prestigious Senior Management Institute for Police at Boston University.  This is a course of study in executive strategic management that is facilitated thru PERF (Police Executive Research Forum).

Lieutenant Colonel Jones is also a graduate of Leadership St. Louis thru FOCUS; which is a locally based nonprofit and is committed to creating regional solutions through community leadership.  She is also a Mentor for FOCUS as well.

Lieutenant Colonel Jones is also a member of the Women Behind the Badge (founding member) group, Ethical Society of Police (ESOP), the Police Officers Association and the Police Leadership Organization.

Lieutenant Colonel Jones serves on the Board of Directors for Birthright Counseling St. Louis and the Katy Ann Foundation where she is also a Mentor.

Having served the citizens of St. Louis with dignity and respect, Lieutenant Colonel Jones has received several awards throughout her career that include three Chief’s Letters of Commendation and fifteen Captain’s Letters for exceptional performance.  She has been the officer of the month for District Four.  She was awarded the “Illuminator Award” from the POW (Professional Organization of Women) and the “Emerald Award” from the Iota Phi Lambda Sorority, Inc., also the “Leadership Award” from the Royal Vagabonds.

Lieutenant Colonel Jones is a native of St. Louis, Missouri and is the oldest daughter of Charles (Sr.) and Janet Jones. She has four sisters and two brothers.  She loves to watch live plays at the Muny Opera in Forest Park and at the Fox Theatre, study leadership, collect and wear antique clothing and jewelry.

Disclaimer:  Photos and videos of all members, guests, speakers, and affiliates may be used in any and all publications and materials promoted by PWA.

The Professional Women’s Alliance is an organization of women supporting one another for personal and professional development.  We strive to keep the annual membership cost affordable to encourage participation.  We also believe in “try it before you buy it” which is the reason we offer potential members the opportunity to attend two events before deciding to join.