We are please to have Nancy E. Rice from Better Together as our speaker. 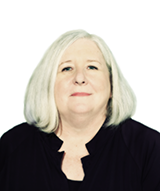 Nancy E. Rice is Executive Director of Better Together and is also a senior member of the Pelopidas, LLC, team. Throughout the past 30 years, Rice has played integral roles in a number of significant public developments. Her most recent campaign win occurred in November 2012, with the passage of a statewide amendment that returned local control to the St. Louis Police Department for the first time since the Civil War.

Rice served as senior aide and political director for Vincent C. Schoemehl during his three terms as Mayor of St. Louis.  During her tenure, she spent several years as Director of Parks, Recreation and Forestry and founded Forest Park Forever, the not-for-profit group that has raised millions of dollars to successfully restore Forest Park in St. Louis to its former glory.

She also spent seven years as the City of St. Louis’ Director of Intergovernmental Affairs where she was responsible for the City’s municipal, state and federal lobbying efforts.  Significant initiatives undertaken during that period include two expansions of the City’s convention center, the first leg of MetroLink (St. Louis’ light-rail mass transit system) and the planned expansion of the City-owned airport, Lambert Field.

Better Together is an organization with the mission of creating a just and prosperous St. Louis region. The organization has studied the impact of the structure and function of the St. Louis region consisting of the City of St. Louis, St. Louis County, 90 independent municipalities within St. Louis County, 43 fire districts, 57 police departments, 81 municipal courts, and the more than 52,000 pages of ordinances that govern the 1.3 million citizens that call it home. Better Together’s studies have revealed a fragmentation that has negatively impacted our community’s ability to thrive and compete in a global economy.

During this program, the Executive Director of Better Together, Nancy E. Rice, will share information about the work the organization is doing and how it impacts the future of this community.