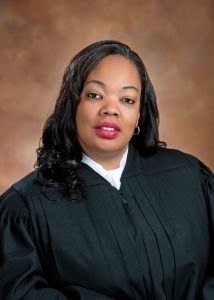 Our speaker will be the Honorable Nicole Colbert-Botchway, associate circuit judge in Missouri’s 22nd District, a former litigator for the Attorney General’s office, first African-American president of the Women Lawyers’ Association and protege of the civil rights icon Frankie Muse Freeman.

Nicole worked in the Circuit Attorney’s office in the City of St. Louis as a prosecutor in the Child Support Unit. She returned to school, earning an MBA at the University of Missouri-St. Louis, working toward a leadership position.

She later joined the Missouri Attorney General’s office as unit chief in the Financial Services Division, supervising a large staff and litigating on behalf of the State of Missouri, Department of Social Services, and Family Support Division.

Her quest for judgeship began in 2002. After countless applications and 13 years of chasing the dream, in July 2015, Missouri Governor Jay Nixon appointed Nicole to the bench. In November 2016 she was retained on the ballot.

“In my opinion, being a judge is the highest form of public service,” she said. “I am thrilled to be in a position that deals in fairness and impartiality. I want to be an inspiration to students to pursue their dreams; to not give up if they believe they have found their calling – no matter how long it takes.”

In her off time, Nicole likes to “party with a purpose,” attending, chairing or participating in events that benefit others in one way or another. Her benevolent efforts focus on strategic planning, stopping violence and providing outlets for youth.

To these ends, she is on the board of Better Family Life, Inc., as well as the board of governors of the Missouri Bar Association and the Bar Association of Metropolitan St. Louis, and works with law students at SLU and UMSL. She is a member of the Links Organization, Inc.